Can A Country Achieve 100% Use of Renewable Energy?

If you think 100% renewable energy will never happen, think again. Several countries have adopted ambitious plan to obtain their power from renewable energy. These countries are not only accelerating RE installations but are also integrating RE into their existing infrastructure to reach a 100% RE mix.

Several countries are pioneers in renewable energy. Iceland gets 85% of the country’s electricity from earth’s heat. The country’s electricity supply is 100% renewable and depends on geothermal and hydropower. Norway is around 98% renewable and uses hydroelectric, geothermal and wind, to achieve its goal. Portugal rely on hydroelectricity for 38% to 58% electricity, wind power contributes one fifth, biomass 5% and solar around 1%.Scotland has a mandate to become 100% renewable by 2020.Paraguay  uses hydropower ,to provides 90% of its electricity and 19% of Brazil’s by using Itaipu dam. The dam took 30 years to build and costs $20 billion. It now helps in displacing 67.5 million tonnes of CO2 a year. Denmark uses 30% wind and 15% biomass for its energy needs. Germany already uses 98% renewable energy.

In a recent study known as The Solutions Project”, Stanford professor Mark Jacobson, has concluded that U.S can meet its 100% of energy demand through renewable by 2050 through concentrated solar power, utility-scale and rooftop PV, onshore and offshore wind, tidal and conventional hydropower and geothermal wave. Study stays to achieve its goal, conscious efforts should be made to obtain all new electricity generation by sunlight, water and wind by 2020 and U.S should replace 80% of its existing energy to renewable sources by 2030 to reach 100% renewable by 2050.
The resource mix of renewable would be different state by state, in California, Texas and Massachusetts it would be as follows- 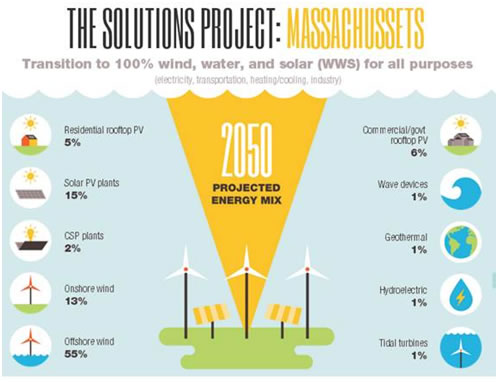 Numerous agencies such as , the International Energy Agency, Stanford University, the United Nations, the Rocky Mountain Institute, Google and other have under taken the analysis of the feasibility of transitioning to clean energy  with respect to barriers, requirements, resource and market availability and cost and have all remarkably come to the same conclusion : 100 % Global transition to clean energy is possible both technically and economically; the only barriers that exist are social and political.

For a country to become 100% renewable, it faces certain technical, economical and political challenges.
- Technical challenges include building of a truly smart grid and integration of storage and micro grid into it. An automated demand response has to be developed to manage energy usage and large swing in supply during peak electric demand, particularly in buildings. Last decade has seen the tremendous development in low cost smart electronics, which will enable the necessary energy management.

- Economic constrains also offers major challenge, as substantial investment is required for the implementation of renewable energy on large scale. It requires large investment in grid storage, transmission to redistribute power and to smooth out intermittency. Among the storage methods available today, pumped-storage hydroelectricity is most cost effective. Low cost electric motors can also be encouraged as it offers the potential for substantial storage via vehicle-to-grid architectures.

- Political challenges include creation of regulatory framework, setting standards and offering incentives to economies to enable them to make dramatic shift in their energy usage to renewables .Political will to accomplish such a challenging goal must exist  and political leaders should come together to plot a course that make economic sense.

Renewable energy should be targeted in the most effective locations such as in the areas without an extensive grid infrastructure, micro-grids should be created and energy storage should be utilized. We should gradually move towards 100% renewable and allow technical advancement and cost reduction along the way which will be driven by global market.

Ecofys, a leading energy consulting firm produced a report on how the 100% of world’s energy demands can be met by renewable energy by the year 2050. As per the report, half of the goal can be met by increasing the energy efficiency to reduce energy demands and other half by producing electricity by switching to renewable energy sources. Ecofys suggested certain suggestions which can be followed to achieve the goal.

Ecofys finds that to achieve the target, up to 3% of the global gross domestic product (GDP) should be diverted to investment in renewable energy, investments in materials and energy efficiency, and necessary infrastructure. This cost will gradually reduce in future as countries will save money by reduced fossil fuel use. The report finds that by 2050, by making necessary changes, we can save nearly 4 trillion Euros ($5.7 trillion) per year on reduced fuel costs and energy efficiency savings.

These high upfront investments will be superseded by saving by the year 2040 or much sooner, if factors such as cost of climate change and impact of burning fossil fuel on public health are considered. If implemented, this plan has the potential to reduce energy-related greenhouse-gas emissions by 80% below 1990 levels by 2050, and will help us to avoid the 2°C global warming "danger limit.

Presently, when we talk about a country achieving 100% renewable goal, it is quite possible for the country with abundant renewable resources which can be utilized in a cost effective and reliable manner. Best example of which is Iceland, which has made use of its local conditions to become 100 % renewable. But for the countries not blessed with abundant natural resources, it is advisable that instead of concentrating on achieving 100% renewable, countries should focus on addressing the important issue of global warming and should aim to establish lowest carbon emission system and in the process if they achieve 100% renewable it will be the best solution for a cleaner environment.